For more than 100 years, Canada has built a reputation as an innovator and pioneer of automotive technology – from steam buggies to high performance gas-powered engines to highly sophisticated emissions-free self-driving vehicles.

The auto sector has grown to dominate Canada’s industrial landscape, particularly in the manufacturing power centre of Ontario. It is also very important to the industrial economy of Quebec. Its influence is felt both economically, as a leading employment sector and income generator, and culturally, as a stimulator of local communities, cityscapes and urban planning). For Canada’s working class, auto factories were a primary battleground to form unions, challenge corporate power and build solidarity to bargain fairer wages and safer working conditions – inspiring others to do the same. The contribution of Canada’s auto sector to the economic and social fabric of the country is incalculable.

Today, the sector is at an inflection point – a time of significant and uncertain change facing the industry and its workers

Climate change threatens the health, safety and well-being of all people on Earth. An over-reliance on non-renewable energy sources, such as gasoline, contributes significantly to the problem. Surviving this crisis and mitigating some of its now irreversible effects requires a rethink of how we do things – from what we eat, to where we work, to how we travel.

The global auto industry certainly contributed to this crisis. Mass-producing internal-combustion engines for more than a century meant freely emitting harmful carbon, methane and other pollutants. However profitable for shareholders and supportive of local economies this industry has been, it has also taken a drastic toll on the environment. Countries all over the world are designing plans to curb emissions with an eye to carbon neutrality. The auto sector is a focus of this change. How the industry reinvents itself in the face of this massive shift is a critical question facing the industry’s 14 million workers globally.1

At the same time, climate change is not the only problem the auto sector and autoworkers face. This inflection point is also compelling governments and employers to assess jobs and domestic production capacity.

In 1999, Canada ranked among the top five auto-producing countries of the world. By the turn of the century, worker fortunes began to fade. In fact, since 2001 Canada’s auto sector shed one-fifth of its workforce, or about 35,000 good-paying largely unionized jobs, due to capacity reductions, layoffs and plant closures. 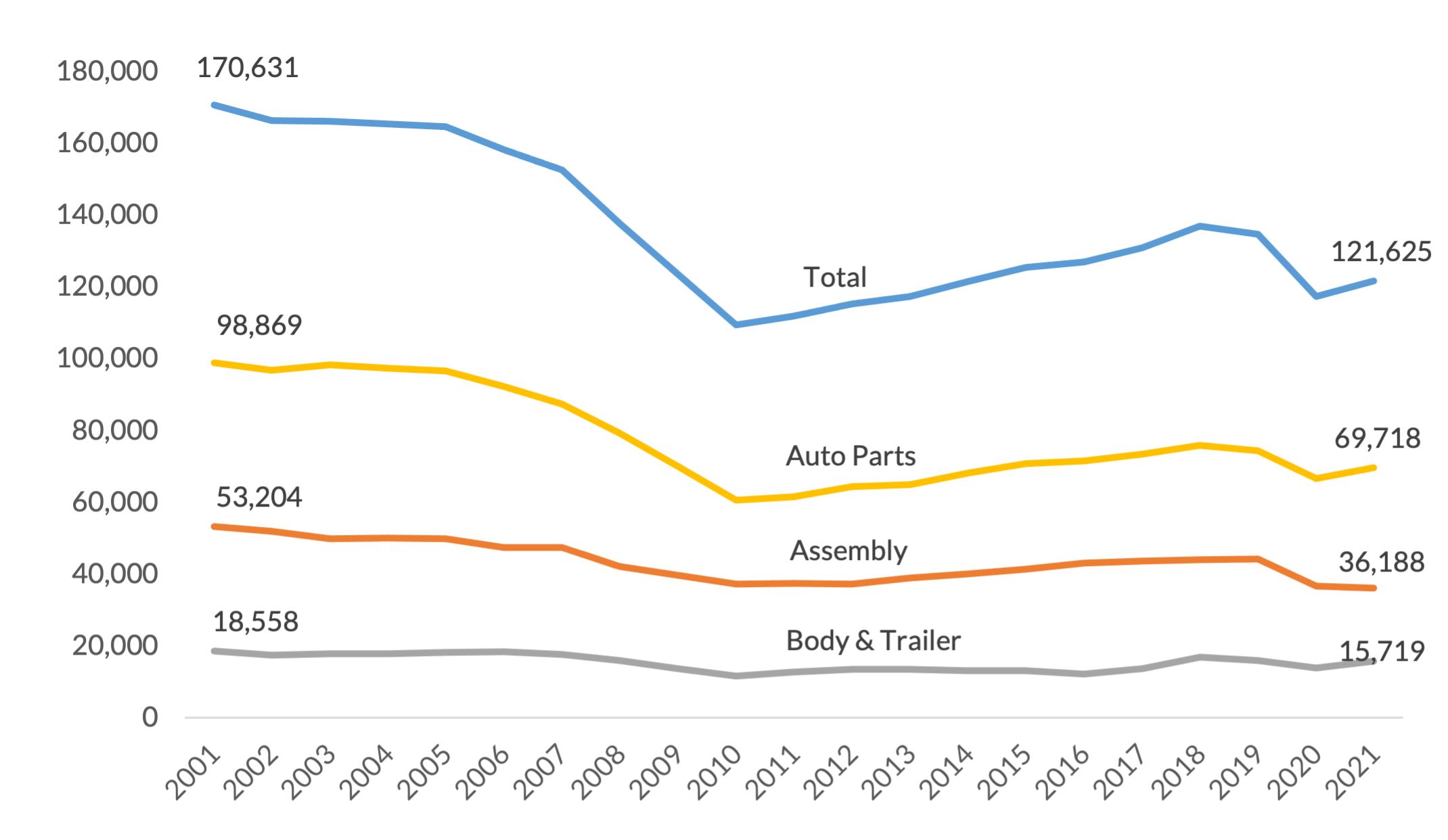 The turn of the century proved a watershed moment for the domestic industry as autoworkers faced new global competitive threats and shifting supply chains. Following the dismantling of the Canada-US Auto Pact in 2001 and the rise of free trade agreements and changes to global production processes, the absence of an active government-led industrial development strategy left Canada in the lurch. Virtually every other auto-producing nation committed to drive sector development through major state-led supports, favourable trade rules and competitive investment policies. Canada’s hands-off approach was an exception not the norm.

This period marked the beginning of China’s ascent as a low-cost automotive superpower. It further drove state-supported, export-driven growth of Japan and South Korea’s auto industries. Mexico too was on the cusp of massive investment inflows and production growth. Then the global financial collapse of 2009 hit and subsequently brought about the restructuring of the auto sector, punctuated by the bankruptcy filings of General Motors (GM) and Chrysler, plunging the Canadian auto industry to unseen depths.

The intervening years saw wage restraint, benefit reductions, pension attacks and the undermining of collective bargaining as common features of labour relations. Young workers, including apprentices, turned away from a sector that appeared dated, old-fashioned, and in inevitable decline.

Today, at this inflection point, there is a once-in-a-lifetime opportunity to write a new narrative for the auto sector – one that benefits workers and communities across the country. Canada has the skills, experience and natural wealth to lead the world in automotive production, innovation and supply chain stability. This can be a story of industrial rebirth and renewal – a story of inclusive economic growth and shared prosperity – a story of sustainability and environmental stewardship.

Navigating the Road Ahead – Rebuilding Canada’s Powerhouse Auto Sector, offers a comprehensive strategy on how Canada can seize this opportunity and form that narrative – one defined by active, coordinated and government-driven economic development through a series of concrete policy recommendations that benefit all stakeholders, including workers.

This vision sets out five core pillars for sector development.

Each of these pillars corresponds to a series of ambitious recommendations, developed by Unifor’s Auto Policy Working Group comprised of local union leadership, Auto Council and Independent Parts Supplier Council executive board members, members of the Unifor National Executive Board as well as national staff. In this approach, the goal is to map a path toward a sustainable auto industry, one that de-risks the future for autoworkers, buffering them against the pitfalls of vulnerable global supply chains, free trade and unregulated capital.

If done right, the rebirth of Canada’s powerhouse auto sector will provide a blueprint on how to bridge efforts at environmental stewardship with economic empowerment and inclusive growth for others to follow.

1 International Labour Organization, The Future of Work in the Automotive Industry: The need to invest in people’s capabilities and decent and sustainable work, Issues Paper (2020): https://www.ilo.org/sector/Resources/publications/WCMS_741659/lang--en/index.htm