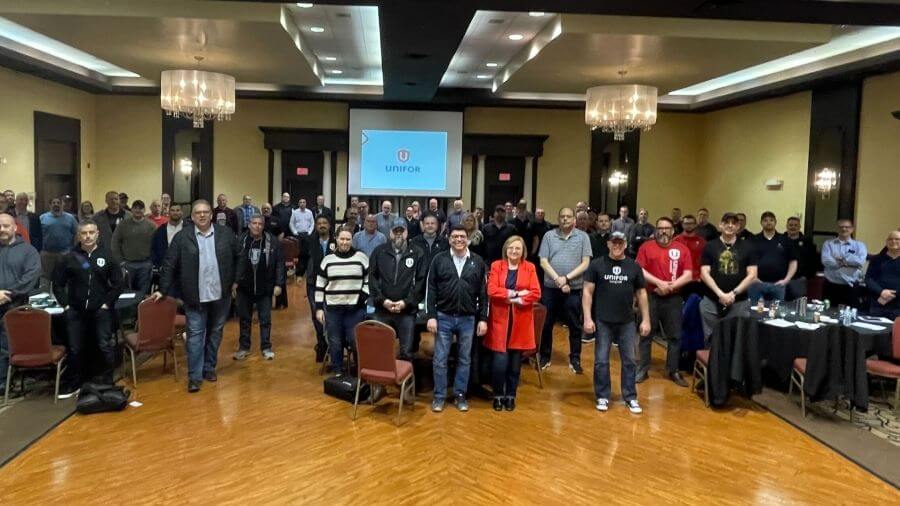 On the heels of the $5 billion Stellantis-LG battery plant announced for Windsor, Unifor auto workers gathered in London to discuss both the opportunities and challenges of transforming Canada’s auto sector.

“So much of where we are today is because of what we bargained in 2020, and because of the leadership in this room and the relationships we have with government,” said John D’Agnolo, Unifor Auto Council Chairperson at the council meeting April 20, 2022.

The Windsor joint venture is the largest single automotive investment in Canadian history and brings 2,500 new direct jobs. It is the latest in a wave of large-scale battery electric vehicle (BEV) investments after Unifor bargained new products for Oakville, Windsor and Ingersoll in 2020 and 2021.

In addition to $590 million in federal and Ontario funding for Ford’s Oakville and Windsor plants, earlier this month, both governments finalized $259 million each as part of the General Motors $2 billion investment in CAMI and Oshawa, delivering on promises made in bargaining.

“Oshawa is growing and its incredible to see a third shift being added. We can’t build enough of these trucks and the biggest issue we have is transport. We have 11,000 trucks sitting around and no rail transport,” reported Jason Gale, Unifor Local 222 Chairperson. “We have told GM that we will not be left behind in their move to electrification. Our trucks are paying for that move.”

Workers at CAMI are expected to assemble Canada’s first electric vehicles, the new line of BrightDrop delivery trucks, by the end of the year.

Local presidents reported on many challenges in each workplace as some are experiencing growth while others are facing temporary layoffs due to retooling or parts supply issues, specifically chip shortages.

“We still have a lot of supplier issues and I don’t see that going away anytime soon, but

the future is incredibly bright and I think we are going to see more investment. I just hope it is in the communities we are most worried about,” said D’Agnolo referring to the Brampton Assembly Plant (BAP), where no product is currently allocated beyond 2023.

“We are currently lobbying our federal, provincial and municipal government with a lot of help of the national union and all governments are on board, supporting us and we believe there is movement and are hoping for peace of mind for our members,” said Danny Price, President of Unifor Local 1285 which represents production and skilled trades workers at the BAP.

“This is a top priority of our organization and we will continue to push companies, with support from government, to make additional investments to keep Canada at the forefront of the electric vehicle transition. Job security of our members working at the Detroit Three and in the independent parts sector is always top of mind for Unifor. This is why we will be relentless in our efforts to lobby for auto investment and new product allocations” said Shane Wark, Assistant to Unifor National President.

Unifor’s Director of Research, Angelo Dicaro presented a draft of the union’s new comprehensive auto sector policy, which makes several recommendations on how to build on the recent successes of the union’s bargaining strategies, rebuild Canada’s auto sector, and ensure no autoworker is left behind.

The policy is among the union’s most ambitious projects to date and will be released once it is finalized, after approval by Unifor’s IPS Council next month.